Pan Dulce, Family, and Magic are on the Menu at La Panadería

by Aaron Amatulli
in Business

Years ago, when the Cáceres brothers were selling pan dulce at a farmer’s market in San Antonio, a woman in a military uniform approached and asked what they were selling. When they told her it was pan dulce and pan de muerto, she burst into tears. Upon offering her some comfort and of course a taste of pan dulce, the brothers found out that this woman had come to the US from Mexico and her last memory in Mexico was of stopping at a local panadería with her mom before crossing the border. This was an eye-opening reminder for the brothers that their craft is more than baking and their product is more than bread; what they are really selling is an ode to their Mexican culture, their childhood, and an elevation of what bread symbolizes for them: family.

Today, La Panadería is a widely known bakery that serves three different areas of San Antonio, Texas. Serving pan dulce, specialty pastries like tequila almond croissants, and many other types of bread, La Panadería uses the power of food to bring people together, to bring cultures together. The influence of other cultures is notable; visitors will feel the touches of German influence and see the French influence intertwined with José and David’s Mexican background.

The brothers travel often, touring bakeries around the world, working with bakers that specialize in regional baking practices, and taking a bit of everything they learn back to La Panadería. That seems to be what sets La Panadería apart; beyond the phenomenal products, it’s the ability the bakery has to weave integral fabrics of different cultures into one, recognizing that there is a difference between mixing and blending. Mixing simply brings two separate components together, while blending creates a new, unique outcome. The highly popular tequila almond croissant is a pristine illustration of what happens when blending works out perfectly, even if it was an accident.

One night, David was doing some late-night baking and José suggested he make some almond croissants, thinking those would sell well the next day. As David got to work, he realized he was missing one important ingredient for the croissants: rum. The recipe for the sweet almond mixture called for rum and David didn’t have any on hand. Since it was 2 AM and he was new to the city, he knew his chances of finding rum were slim. He was looking around the kitchen, trying to see if he had anything he could use instead of rum and he saw a big bottle of tequila looking back at him. He took a risk, not sure if the tequila would ruin the entire batch, but it ended up creating a work of art that brings in customers from all over the state.

In order to make the best breads and pastries, the brothers employ all the best practices they have learned from bakeries all over the world. Refusing to use anything but pure European butter might seem like a costly decision to some, but to David and José, it is a no-brainer because it tastes the best. Additionally, they know that art can’t be rushed, which can sound counterintuitive in an industry where fresh products have to be made daily. With their standard 48-hour fermentation process, their baked goods are given more time to rise, getting the ultimate fluff factor every time.

It is not just about ingredients and baking procedures though; the brothers have a staff of over 100 baking experts that work overnight at their various locations to make the magic happen. When customers begin lining the block early in the morning, the smell of fresh-baked treats and the warmth of the ovens feel like magic. While there’s no denying that baking involves some magic, it also takes a lot of hard work. Every single night, when the clock strikes midnight, teams of bakers begin working diligently to make sure tomorrow seems even better than today. What makes it all possible is the endless commitment to a 7-day-a-week business from people who know that baking is about so much more than pan dulce or croissants. 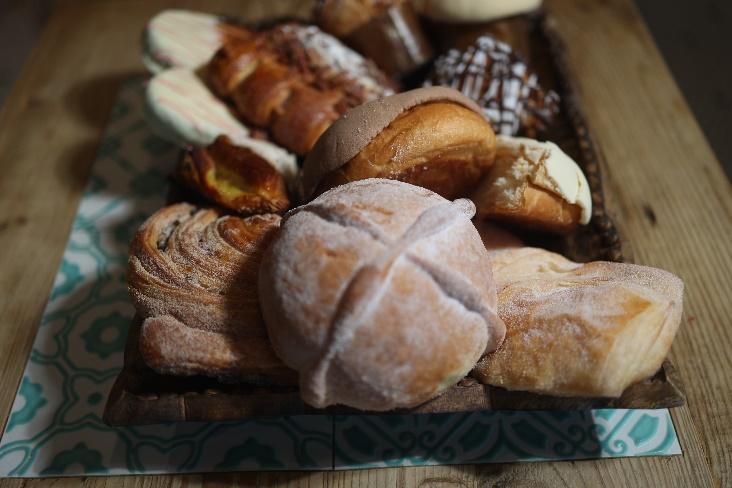 José and David’s commitment to their craft permeates their bakeries at every level, and when the going gets tough, they think back to the lessons their mother taught them. A baker herself, she spent many days bringing pan dulce and other bread to restaurants all over Mexico City. Every morning, before the sun had begun to open up the sky, she would be filling her orange Volkswagen up with bread, putting a smile on her face, and getting ready to sell a little piece of her heart with each piece of pan dulce.

The brothers have fond memories of working with their mother, selling bread on the streets of Mexico City when they weren’t in school. Even though those memories come with long days and hard work, José and David use them to fuel their passion today. It was those days that allowed them to spend hours with their mom, sharing their collective love for pan dulce and for their Mexican culture. They credit their mother’s teachings for reminding them that by staying true to themselves and never giving up on their dreams, they are capable of anything.

There are three main ways to share and evolve culture: language, art, and food. When a customer takes a bite of one of their products, they want that customer to get a glimpse into the beauty of Mexican culture, French culture, German culture, or any other influences that may be present. Each piece of pan dulce is about so much more than a sweet, delightful eating experience; it’s about offering a window for people to look through, to feel as if they were part of David and José’s childhood, filled with laughter, family, and of course, pan dulce
.

Aaron Amatulli is a trends reporter for NY Weekly. He has worked and interned at Vanity Fair, Apple, BULLETT, and Conde Nast Traveler.